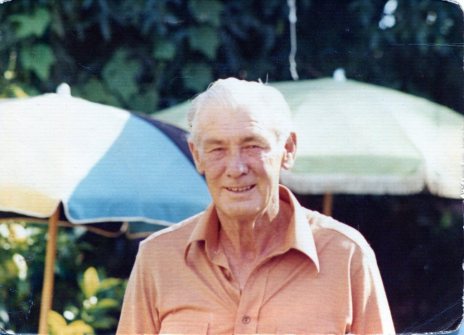 Today would have been his 100th birthday.

He was born in Camperdown, in Sydney’s inner south-west, to Ellen Amelia Carmichael (nee Buckley) a shearer’s cook.  Not a lot is known about his dad – he left when Papa and his sister, Ethel, were young.

Ellen worked away a lot of the time, taking Ethel with her, so Papa lived most of his early years with his Aunts (his father’s sisters) around Surry Hills, where he learned violin and bodysurfed at Bronte. He also spent a lot of time at Leura, in the Blue Mountains, with his Uncle Charlie.

Hating school, he left at thirteen years of age, in 1926.

His early working life was spent as a labourer, working on the Woronora Dam before moving on to a road-building crew out of Dorrigo, in the Northern Tablelands of New South Wales. 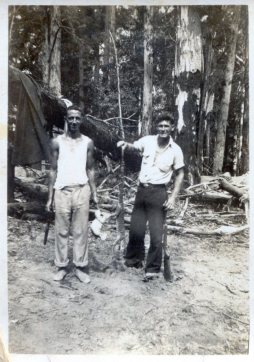 Yep, it’s a goanna. Can’t verify if it’s dead or alive. The gun might be a bit of a give-away. Dorrigo road building.

Shaving a workmate with a cut-throat, road building camp, near Dorrigo. 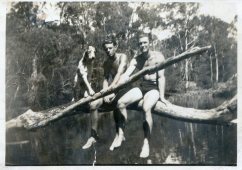 Time off from road building, around Dorrigo, 1930s. Check out the dog’s paw.

On the first of September, 1939, Germany invaded Poland. Two days later, England declared war on Germany and, as an ally, so did Australia. By December that year, Bill had enlisted. From his home at Clouds Creek he travelled to Grafton, where he signed up, joining the 2/1st Machine Gun Battalion. They set sail from Australia in May, 1940.

The Machine Gunners served in England, Egypt, Greece, Crete, Palestine, Syria, New Guinea and Borneo, also spending time back in Australia, at Ingleburn Army Camp. He never spoke much about his time as a soldier, but as a kid I remember the cigarette tin he kept in his sock draw. We always joked that smoking had saved his life, because in that tin was a machine gun shell. Fired from behind enemy lines, it had perfectly pierced the cigarette tin in his pocket. And stayed there. He was literally inches away from death. It was so unthinkable, but one of those miraculous escapes from death you often hear of, and worthy enough to be included in the book Amateur Soldier: an Australian machine gunner’s memories of World War II, written by fellow machine-gunner John Bellair.

It was also during this time (1940) that Bill was hospitalised in Scotland, for mumps of all things. Upon finding out he was Australian, one of his nurses thought that he might like a visit from a fellow Aussie. It just so happened that her son was dating an Australian girl, so she asked her to come in and chat with Bill. That woman was Jeanette, who was born in Corowa, NSW, in 1922 and moved to Scotland as a 9 year-old, in 1931. She was working for the Department of Railways when she met Bill. No one knows what happened to the boyfriend, but Bill and Jean wrote to each other for the next eight years. Bill survived the cigarette tin incident, and Jean, who had since gone on to join the WRAF as a psychological profiler screening pilots, survived The Blitz.

After the war ended, Bill started working as an orderly at the Heidelberg Repatriation Hospital, in Melbourne. In 1948 Jean, along with her mother and father, came out to Australia (Jean’s father, Lindsay, was an Australian, born in Corowa), and Bill and Jean married that same year.

They soon moved to Sydney, and settled in Glebe, before moving again, back to Melbourne and settling in Moonee Ponds, where Jean’s parents had secured a house.

Bill initially found work in a foundry, and in 1951 Bill and Jean welcomed a daughter, Lynette.

After Lyn was born, Bill went on to work as a tram driver. It has been rumoured that, despite his mild-mannered nature, he would ram the tram into unsuspecting motorists who had wandered into his path.

Deciding that tram driving might not be for him, Bill went on to join Melbourne’s Metropolitan Fire Brigade (MFB) in the mid 1950s. He stayed there until 1974, when he suffered a stroke and was forced into retirement.

In the late-70s, Bill worked on the gates at VFL Park (Waverley Park) on his rostered Saturdays. We used to live just down the road, in Noble Park North, and he would come over for a pre-match lunch of poached eggs on the days he was working. Sometimes we would call past at three-quarter time, or thereabouts, to say hello to Bill, in his blue gatekeepers’ coat.  I remember it being quite a thrill to have a grandfather who worked at VFL Park.

I was born exactly sixty years and one week after Bill, on the tenth of the tenth, nineteen seventy-three (10/10/73). My brother was born on the first of the first, nineteen seventy-nine (01/01/79).  They were the only two birthdates he remembered with accuracy (it was easy, he said – he only had to remember two numbers, ten and one).

He was a wealth of knowledge. I remember sitting at the dining table with him as a primary school kid, listening to ABC Radio, Majestic Fanfare heralding the news bulletin (as it still does today), and marvelling at his handwriting – so perfectly formed and consistent – and his cryptic crossword skills.

An incredibly calm and kind man, despite returning from a war that left him Totally and Permanently Incapacitated (TPI). My Nana, Jean, never knew exactly what was wrong because Bill would never talk about it, but she had spoken of the night terrors he suffered, and how he screamed and thrashed in his sleep, and it’s in all likelihood Bill was suffering what we now know as Post-Traumatic Stress Disorder (PTSD).

We were so lucky to be able to spend so much time with Bill, doing simple things, like how he puffed out his gut and invited you – as a young kid – to punch as hard as you could, more often than not hurting your hand before he ever felt pain. Digging up potatoes in the backyard, that sort of thing. Lucky to be able to spend time at places like Pambula Beach, where you’d watch the sun rise over the Pacific, and then embark on the daily walk down the thirty-nine steps to the Pambula River mouth, digging in the sand, then walking around the bend, along the beach and across the rocks to the caravan park, where we’d buy a bag of mixed lollies.  Then back up again to the holiday house, where we would sit around at night and try and figure out what rugby league was all about.

Hanging out with pre-teens, in his element.

A patient and entertaining father and grandfather. Sarcastic, humorous, and kind. “The epitome of elegance” he called me, because I was anything but.

A passionate Essendon supporter, he went to bed early on the night of Friday the 9th of August, 1991, having cracked it because Essendon were playing so badly.

He never woke up.

Our lovely man, resting in peace.

Special thanks to my mum, Lyn, for providing a lot of the information on Bill’s early life and work history.  xx